Today was the first official day of Dr Wheel's holiday*.  Naturally, I woke up at 5:45 and then woke him up going "Entertain meeee!"  Well actually he wanted to get to the supermarket early to avoid the Christmas rush and buy a chicken.

In NZ, even though it's summer for Christmas, folks still seem to go for the giant roast meal - usually lunch - full of stodgy and hearty winter-filling goodness.  And pav.  It's not Christmas without pav, preferably decorated with kiwifruit (note Americans - it is *not* called a kiwi, that is a type of bird) and strawberries thus: 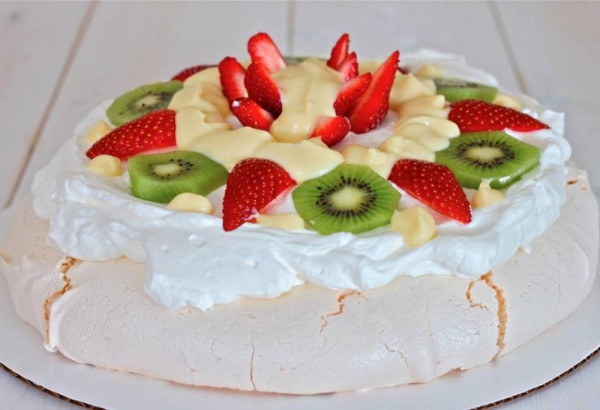 Basically if it doesn't look like this you're doing it wrong.
Consequently, after lunch on Christmas Day everyone sits around nursing their foodbabies, but unlike those northern hemisphere types, it's also quite often 25 degrees.  Some folks go to the beach.  We usually host the Christmas for our lot because we're the ones with a house big enough for Dr Wheel's large and boisterous family.  Dr Wheel's large and boisterous family also enjoys shared feeding.  This means that everyone brings something, usually in large enough quantities to feed everyone, and so we end up with enough food to feed about 20 people. Everyone makes a valiant effort to make it disappear, and whatever's left over ends up being our meals for the next 6 weeks**.

In my family, the traditional Christmas meal was eggs, beans, and chips.  My Mum believed that fancy Christmas meals were often the result of unsung labour by one person while everyone else had a holiday, and she wasn't having that - thus, the simplest meal anyone could think of.  Also, not huge.

In my view there is something to be said for not consuming your own bodyweight in fat and sugar in the name of capitalism/religion.  But .... PAV!!  Pav will always be my downfall.

* Not mine. Mine started on Wednesday and goes gloriously till the end of February,  the fact of which I'm reminding anyone who will listen because it's the first holiday longer than 2 weeks that I've had since I started working my first proper job and OMG.
** Slight exaggeration alert.
Collapse