Second hip hop class last night, this one with the Projekt team.  These guys seem to have much better idea of what beginner means, and they cover all styles of street dance.

That having been said, what we were doing last night was actually 90s boyband styles, so we were smooooth.  Well, some of us were. Others of us were flaily *ahem*.  Class was the same format as last week's - learn a move or two, practice a few times, tack it onto the previous move, try it with music.  Only this time, the music wasn't going three times as fast as the practice and for the most part I could keep up without getting my arms and legs tangled up.  For the most part....

Anyway, after an hour of this we'd learned about 10 seconds of dance which included about 12 different steps.  Apparently next week we'll be consolidating that and adding a bit more.  The music was Faded by soulDecision, - 90s/2000 funk basically. We got as far as the bit where it goes "Couldn't we do what we did last night again" - one verse.  And we were only two lines into the first verse when I got down to a singlet.  Being smooth apparently requires effort!

I felt slightly less unco this time, possibly because of the more appropriate pace, but maybe because I'm learning something?  I can feel my brain working in an interesting way while I'm doing it - I've never done any formal dance training before so this idea of teaching my body to do movements and then remembering a sequence of them at high speed is completely new to me.  Maybe I'm creating new neural pathways and this will ward of senility!

I also had a pole class yesterday in which we were learning to do this: 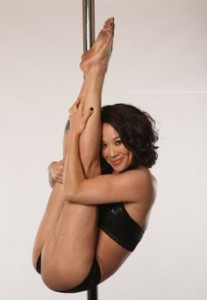 As you can imagine, getting into this from standing involves serious hip flexor and core action, and staying in it involves serious armpit action.  Adding the hip hop onto this with flexing my brains while jumping up and down and trying to coordinate my feet, and a job interview as well, and I feel like I burned all the protein yesterday.  Today I slept until my alarm went off.

I am totally going to be the funkiest granny in the rest home.