About 18 months ago, I decided it was time to make a proper blog for my making stuff stuff, since it was getting to be such a big part of my life.  So I quietly set about figuring out how to use Wordpress, getting plugins and whatnot together, deciding on a style* and beginning to upload content.

Fact is I haven't even come close to uploading all the historical content I have, but I'm quite good at updating with my latest work so it has fairly regular posts and new pages being added all the time - particularly tutorials.

Here it is if you're interested - I Make Stuff. 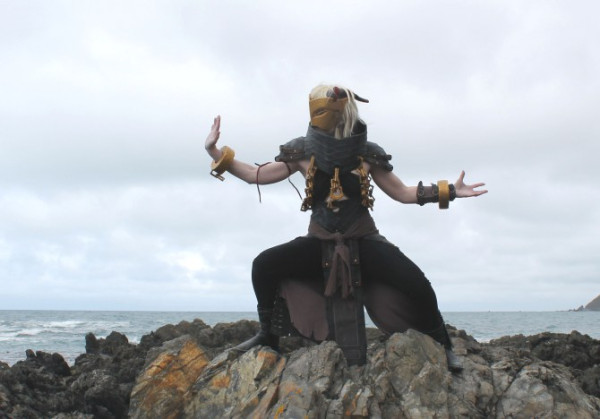 That picture was published on the day my site had the most views ever, because it was featured on some obscure Italian cosplay site.  375 whole views! In one day!

I don't really look at the site stats very often, because I'm not out to make money, don't host any advertising, don't really promote it, and don't care all that much. It's more of a repository for my WIP shots and tutorials that I can  point people to when they ask me questions than anything else.  Despite that, it seems to consistently get about 40 unique visitors and about 60 views a day.  Not exactly fame or fortune, but given that I'm just some random cosplayer from Nowheresville, it's a little gratifying that people actually go look.

By far the most popular page is the tutorial for the Grey Warden costume (the costume in my icon, can be seen fully here).  Partly I think because it's the least obscure costume I've made, and partly because it was featured on CosplayTutorials.

And it's had over 11,000 visitors since I started it.  Again, I'm not about to start my own fan club, but it's nice to think people are getting something out of my ramblings.  I guess I'll keep doing it then.  And maybe one day if I open up commissions, it'll come in handy to have it be a little bit known among obscure nerds.

* I don't really have any style and my blog looks oldfashioned but I don't care.