Dr Wheel's pretty awesome in many many ways. Sometimes I number them, so here's #462: Tensegrity. 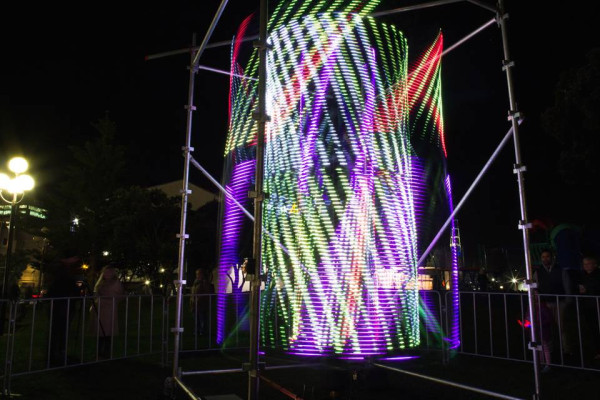 (photo by James Myers)
This is his second interactive LED artwork. The first was a hemisphere of LEDs that you sat inside and controlled the speed of a plasma pattern. This one is a little more ambitious, and is a 4m high rotating cylinder with LED strips running generative patterns on three layers of helical struts, which when spinning, creates 3-D patterns in space. The speed it spins is controlled by a stationary exercise bike. He built it with a couple of friends (Hi Patrick and Felicia!) this summer for Kiwiburn, and added the bike this winter with the help of my brother

grist, under the name of Improbable Construction.

It's on display at the moment at Wellington's LUX festival, a festival of light art that is held at the end of winter. What nobody anticipated was how popular this would be with children! Dr Wheel is getting so many compliments about his art, it's awesome. He even got on our national news site!.

#463 is the way he's not getting a headswell from everyone telling him how clever he is all the time. <3
Collapse