Here is a map of the area where we were camping, in the Cass Valley just to the north of the Misery Stream on the edge of Misery Swamp, in between Mt Misery and Mt Horrible. 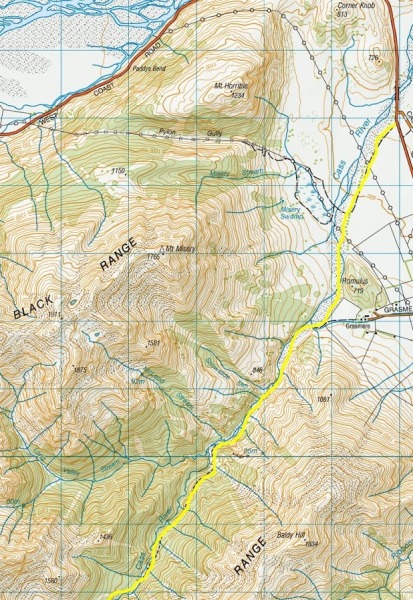 This area was settled in the 1800s when being happy was a sin, and I'm pretty sure the names reflect the era rather than anything specific about the area.

At lunchtime on Sunday, after cleaning up the mess left by Gutsache and breaking down our camp (hunters are into Leave No Trace too), we headed back to Christchurch just in time for a big feed of fish and chips and a warm, soft motel bed for our last night.

You might have noticed the distinct lack of deer shooting in this story of wandering around the scenery freezing my arse off. That's because after those three on the first day, we didn't see any more. Evan's pretty convinced that someone had been through there in the last week or so and chased them all off, given that the sign was everywhere but not fresh. I'm inclined to agree. I may not have been a deer hunter before, but I can track pretty well and I know my poo and prints and browsing signs - the deer had been there, in average numbers (maybe 40 on the block), but they'd buggered off about a week before we got there and left us with rabbits and hares and pigs**.

In some ways, that's ok. I don't actually *need* venison to survive. I'd like a skin but can live without it. And I feel good knowing that even dyed-in-the-wool Kiwi Jokers (more about this later) are capable of discernment in selecting what and what not to shoot at.

So there you have it. I went, I camped, I shot a rifle with some success, I walked around a lot, got snowed on, hung out with Evan, and took tourist pictures of scenery to show to The Internet. I call that winning, even without a freezer full of meat.