NZ doesn't have any native mammals, so ecological niches tend to be filled by birds. Thus, we have a mountain-dwelling, snow-loving, semi nocturnal parrot called the kea. IMO if it were a mammal it'd be a monkey. 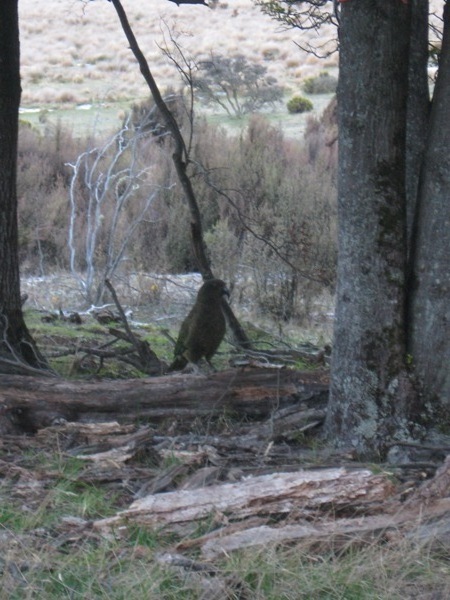 Kea have beaks like a tin opener, the curiosity and intelligence of monkeys, and the determination of.. well, a very determined thing. They are renowned for dismantling the vehicles of tourists and snowboarders, and there used to be a bounty on them because in winter they'd grab onto the wool of sheep and hang there, chewing through the skin and gobbling the fat around the sheep's kidneys. This would kill the sheep but the kea didn't give a crap about that, they were just all OM NOM NOM NOM kidney fat.

So that little guy up there discovered our camp on the second day. He homed in on the cheese and scoffed about 200g of it before Evan spotted him and chased him off. Naturally, he came back, staying just out of reach but coming close enough to make it clear that nothing would be sacred. We built a cairn of plastic to keep our food safe, but in the night he returned and pulled that to pieces, rummaged through it and helped himself to what he wanted, using his beak to zip open cartons and packets as if they were nothing. In total he scoffed:

600g of cheese
half a pound of butter
a tube of condensed milk.

Now, given that NZ doesn't have mammals, I'd be keen to know where kea got their taste for dairy products. Anyway, we didn't see him again after that. I know what eating all that after living on nothing but mountain fare would do to my insides, and I suspect our wee friend spent the rest of our time there sleeping of the mother of all stomach aches. Hence the name.

Also, I'm alive. So are all the deer. More photos of scenery and stuff later.
Collapse