So last night while upside down practicing low candle, Happy, who is nothing if not bloody distracting, asked me what I thought of Scottish Independence. He's English, so of course I was all "They should do it!" *ahem*

Not that I claim to be any kind of an expert on Scottish politics or governance, but I do live in a country with a similar population, that's been governing itself for quite a long time, and is doing ok (despite the current government rather than because of it). And I reckon that if self-governance is what the people of Scotland want, then it should happen. I also think Scotland should join the Nordic countries - but only if they let poor Estonia in too.

Meanwhile, in the garden.. 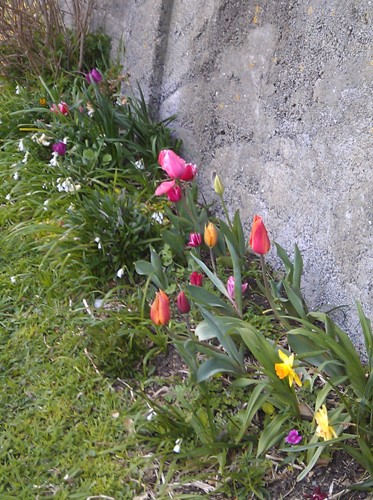 The tulip display isn't quite as dense as I'd envisioned, but it's still pretty and at this time of year when there's not much else happening in the garden, they definitely cheer things up. At the moment there are stocks, the earliest geranium, daffodils, tulips, onion weed (damnit!), anemones, and the first of the carpet roses. But also, the delphiniums I planted last year are coming up again! I've always treated delphiniums as an annual, so I'm rapt to see them reviving, and hopefully I'll get more this year because they're mature. And some cosmos have self-seeded, which always makes me happy.

I get the feeling there might be some gardening this weekend.

And in broken arse news, my arse is still broken. It's been three weeks now and it's at the point where I'm allowed to start stretching it again. Stretching = pain, and slow, and harder to get it to where it needs to be. I'm told that this is all normal and that eventually I may even be able to get it further than before (because the tendon is now not as firmly attached), but at this point that seems like a future pipe dream. In the meantime, sitting hurts, bending hurts, and stretching hurts. Clearly I should just lie down all the time.

For those of you on my flist who are gamers, here's a survey about diversity in video games - gender, race, sexuality - and whether you think developers should be doing more to be inclusive.
Collapse