This is Fuckolt. He is a blue-spotted jaguar with a bellybutton who is another in a great tradition of naming my cuddly toys* after mispronounced philosophers. He was given to me by sympathetic friends when Dr Wheel made his first overseas pilgrimage (that was 18 months in Hong Kong), and it's become a Thing I Do when he's away to share my bed with Fuckolt. 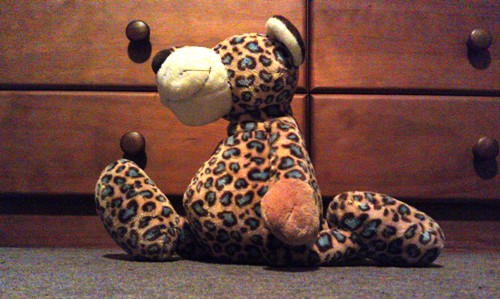 Lately, Fuckolt has been joining me for my morning stretches. Every day I start the day with a bunch of core engagement exercises (which really help my back), followed by stretches and lying up against the wall in straddle while I do a bunch of geography flash cards**. As you can see, Fuckolt is more flexible than me. I have to do about an hour of warming up and stretching before I can split. Bendy little bastard.

Meanwhile, as a gamer of over 30 years I have absolutely no doubt of the level of antipathy against women in much of the gaming community. Used to be it was mostly by erasure (back in the 80s), but I have to say that back then it was nowhere near as bad as it is now. I blame the anonymity of the internet allowing the lowest common denominator to have equal voice with those who actually have something useful to say. I'm aware of the power of vocal minorities (how else could anyone claim that the PM won last night's leaders' debate, hmm?), and that the majority of men in gaming are probably not misogynistic arseholes.

The irony of course, is that when any woman dares to point out that gaming is still quite problematic for women, and that the industry itself tends to pander to a straight male audience, those very misogynistic arseholes turn out en masse to show these uppity women that misogyny doesn't exist in gaming - usually by making misogynistic slurs, rape threats and the like.

Anita Sarkeesian, often a target for her series of videos entitled Tropes vs Women in Video Games, has had to go into hiding after threats to her family from a particularly nasty stalker coinciding with the release of her latest video. I've watched all the videos in the series and while I don't agree with everything she says, she has a lot of valid points. And I am speaking with the authority of having been a woman gamer for longer than a lot of the trolls that threaten her have even been alive. But apparently, according to people who never experience sexism in video games, it doesn't exist and the way to make sure everyone knows this is to threaten any woman who dares say it does.

Proving you're not a pack of misogynistic arseholes - UR DOIN IT RONG.


* I have a substantial collection of cuddly toys. I didn't buy any of them for myself. Go figure.
** Transnistria is a place! It totally is. So is Sint Eustatius, despite some folks' efforts to deny it.
Collapse