So you know how I was going up north to visit with Kiri and Evan and we were planning to go out chasing big fish? Well, that was just a facetious remark tossed off based on how Evan had caught that big broadbill a couple of months ago. I was actually just looking forward to getting out there on the ocean with these guys for the first time in forever. I thought maybe we'd catch a few snapper, a kingfish perhaps, and have a nice day out. 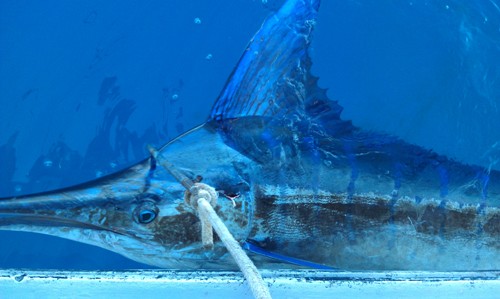 Apparently sometimes you just can't avoid catching fish. This was one of those days. We had been fishing for hapuka and kingfish, had let go one kingie that was just over legal size (75cm), and were puttering along to the next spot and hearing on the radio about how quite a lot of people had marlin round their boats. Now, marlin in May are pretty uncommon - they're a seasonal fish here and usually they disappear through April. We thought we'd have a go at catching one, so I drove the boat chasing gannets while the others had some friendly banter about whose gear would get a swim as they put lures in the water.

I think that conversation never got finished because within 15 minutes we had a fish in the gear and after three good goes and a fair bit of "Hey guys, you know I don't really know what I'm doing up here eh?" from me at the wheel, we had hooked up. At which point I got shoved out of the driver's seat and told to go pull that fish in. 15 minutes of this thing going apeshit all over the ocean, followed by half an hour of me vs fish slugging it out, the above picture was the result.

So my backpack on the way home contained not only the winter work clothes I'd bought while Kiri was working on Friday, but also that chunk of broadbill that I'd been given from Evan's catch (which weighs about 3kg), a marlin bill, a kayak drogue that Kiri had given me, and a small overhead reel that Evan decided I need for catching kingfish with. Suffice to say I'm glad they didn't decide to search my luggage, eh?

I have known Kiri and Evan for over 20 years. I shudder to think how many hours we've all spent together out on the sea, trying to catch a marlin. We've all caught them at various times, but never together. This weekend, we fixed that omission. It feels good. First time we've been out together in god knows how long, and whammo! Marlin. Nice.

And on top of that, I still got the thing I went for - the opportunity to get out on the ocean with them the way we used to, and do that thing we all love doing so much together. The marlin was just a bonus, a way to make the trip even more memorable. The look on Evan's face as we chugged back into Tutukaka was priceless - happy as fuck and just a tiny bit smug. Says it all, really. ;-)

Oh yeah, so who likes smoked fish then? Cos there's no way it's all going to fit in our freezer..
Collapse