So the reason that calves love* Peach Teats is apparently because they have a special valve that allows the milk to flow evenly, so the calf gets a drink without being choked. Also, they apparently feel like cow teats. Although I'm not convinced of this one - maybe it's that they feel more like cow teats than the other ones. Peaches have nothing to do with it, except the colour.

Anyway, have a video of me feeding a stingray:

That's Stumpy. He's got no sting because some arsehole cut it off. This is a fairly common thing when stingrays are caught by fishers - they cut the sting off and throw them back. It does mean I could safely pat him without becoming a Steve Irwin, but it's also somewhat akin to throwing a shark back after cutting off its dorsal fin. Anyway, Stumpy seems to have found somewhere safe to hang out, and has successfully become the biggest stingray I've ever seen, never mind patted. 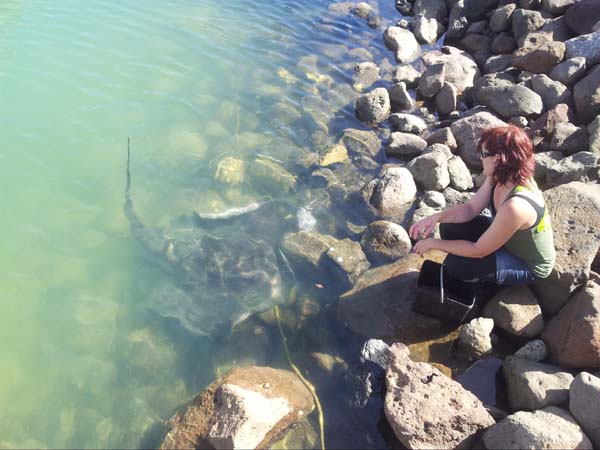 I didn't pat Stingy, since he still has his sting, but he was just as friendly. There was a third, smaller ray hanging round too, but that one didn't get much of a look in with the two big ones around.

Did I mention this holiday was quite cool?

* This is a bit of a claim, I wouldn't like to try and prove it to be honest. It might be more accurate to say "Peach Teats - Calves are easier to train to them" but I can see why they made it a bit more snappy.
Collapse