I realised this morning that it's been over two years since I gave up smoking. I will be over here feeling pleased with myself.

Meanwhile, Wellington folks - how did you weather the night? I surveyed the carnage this morning and we came off pretty lightly. I've lost one broccoli, one bean and a couple of flower plants. Two of the pots around the deck had tipped over and one rootbound succulent had travelled a few metres. Oddly, one of the little tags that label the herb garden had come out, blown up and over and landed on the windward side of the deck railing. Weird. But no actual damage to anything, and considering how exposed our house is I think we're pretty lucky, it was wild out there last night.

Here's a vid of some people who didn't fare as well as we did. I'm surprised actually, because that wind was northerly so I thought the south coast would be better off than this. And here's an article in which a trampoline ends up hanging from a power line. Gosh.

I got an email last night from the people who make expanded PVC foam in NZ, and they are sending me a sample to test for its potential as a thermoplastic for making armour. If it works, it's cheaper by the sheet, the sheets are twice the size, and it comes in 4mm and 6mm so I wouldn't have to do the Wonderflex sandwich to get a suitable armour thickness. What this means is that it would cost approximately a quarter of the expected Wonderflex cost for the Cullen costume, and it'd weigh about half as much. Cue sighs of relief from Dr Wheel, since a lot of Cullen's armour sits on his shoulders.

Also, this is not paper mache drying weather and I am unimpressed by that. My sword is ready for the final smoothing with modelling clay on the fancy bits (not the blade, I managed to sand that to shape and smoothness), but I can't add it till the paper's dry and that should have happened already, damnitall. *grumble* On the upside, I was able to do a four-strand handle braid with scarlet binding tape and that makes it look fancy as. Vis: 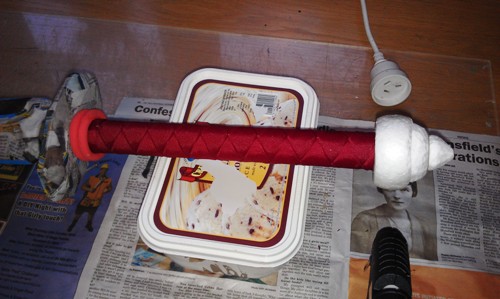 The problem with handle braiding is that all the knobs and ties and filigree stuff goes over the top, so you have to do it fairly early on and then try to avoid getting stuff all over it as you finish the rest of the piece. I suspect I'll be masking this for the painting process.