So you know how Dr Wheel is learning Haskell? Well last night the YoT informed us about Malbolge, an esoteric programming language that was deliberately designed to make it impossible to write a functioning program with it. However, it has flaws that can be exploited to get around that somewhat defeatist design, and thus people actually do use it. Well, in actuality, it's probably *person* that uses it. Because well..

Here is an example of how to do the ubiquitous "Hello World!" in Malbolge:

Yep yep yep, it looks like a crochet pattern to me too. Interesting that fibre artists invented the first computers. Hmmm..

Anyway, have a picture of something pretty on our deck: 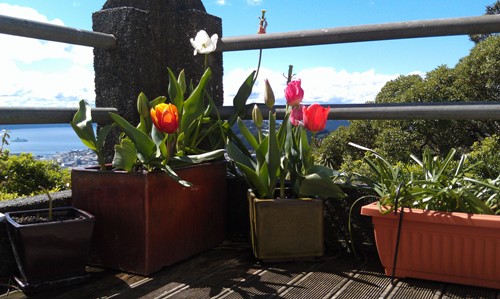 - Finished Yorick. Made the ring. I think it's ugly but it works. I am not sure how to make it better, but

pombagira, if you're ok with it I'd like to hang onto it for another few days to try and make the ring less ugly.

This evening is the first class of the new term for adagio. This time I have a partner to learn and practice with, even if we don't get to play together in class (they tend not to pair noobs togehter for safety reasons and while we aren't complete noobs, we are compared with a lot of our classmates). I expect this will make it more appealing. I'm not hugely enamoured with cheerleading-style adagio, but it's all we have here right now and all training helps, right?

Meanwhile, we have more spring winds. It's gale force northerly and I've no doubt the sheep would be dry if it didn't keep raining. When they do dry, they'll be *really* fluffy because they've been blowdried. Hopefully that'll be tomorrow evening.

Oh yeah, and we watched that movie about Steve Jobs and Bill Gates. Apparently Jobs was an arsehole and Gates is a socially-awkward manipulator. Or maybe that's just Hollywood.
Collapse