Yesterday I was trying to work out how to hook a set of pauldrons on to a jerkin so they are removable. The pic doesn't show anything about the mechanism except that it's not a buckle: 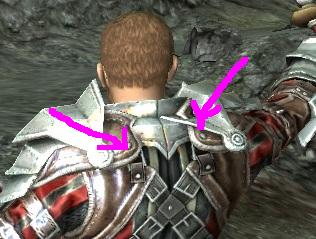 So I figured if I rivet a stainless steel shepherd's whistle on the inside of the pauldrons where the arrows point, I could hook the square loops from the backstraps over them and as long as they are situated right re: tightness, they'll stay put, because shepherd's whistles have a deeper hook than any of the hooks I could find online, including picture hooks and bootlace hooks and industrial tiedown hooks. And off I went searching for stainless shepherd's whistles online, since they aren't the sort of thing you find in shops in central Wellington. In my travels I found many types of shepherd's whistle, for many different prices.

Turns out you can get a mammoth ivory dog whistle for a mere $150US. Or you can get your bog standard stainless steel ones for $2.60NZ. I know which one I'll be buying. *ahem*

However, it led me to be a bit weirded out by the idea of putting something in my mouth that had also been in the mouth of an animal that died tens of thousands of years ago. Not in a "Ew gross!" kind of way, just in a*boggly mind* kind of way. And possibly there's that thing where the ivory trade is generally looked on with disgust, so I've got a bit of *tut tut* going on about ivory, even though mammoth ivory is not about to cause extinctions. I mentioned my weirded-outness, and it led to people telling me about their mammoth ivory earrings. To which I went "All these extinct animal parts being worn as jewellery! Haast's eagle claw earrings, anyone?" Which led to the conclusion that fossilised moa testicles could potentially become a fashion item.

Because why not, right?

Meanwhile, I am starting to see a link between the Psychoactive Substances Bill and the moral panic created in the media about legal highs. For a while, I couldn't work out why the panic was being stirred up when regulation was being passed already - what purpose would it serve to make the populace react like this? Now the law has been passed, local councils have been given the power to decide whether, and how, legal highs will be sold in their areas. So we are getting situations like this, where councils are moving to ban the substances locally based on anecdata and hype about the so-called dangers of legal highs. Many of which have been given an initial interim tick by the Ministry of Health to be sold, but perhaps will not pass the more stringent safety testing planned for later this year.

So the government gets to look progressive internationally, meanwhile creating a moral panic locally and passing the banhammer to councils. It seems quite a few councils are looking at preventing the substances being sold by placing onerous restrictions on retailers through zoning and whatnot, in response to public petitions and the like that have come about because of the moral panic around the issue - which was created in the media. *sigh*

Don't get me wrong, I'm no fan of synthetic cannabis. I have tried it three times and on the third occasion I had an anxiety attack and threw out all the rest of the stuff I had because it just.felt.wrong. I know of another person who's had a similar reaction. I know still another person who had found themselves becoming dependent on one of them - but that was the one that was later found to contain benzodiazepines, which are highly dependence-inducing. And the whole point of regulating sales and putting in place a testing regime is to ensure that benzo-containing synthetic pot can't slip through in imports, and that if a substance causes anxiety attacks in people, it won't be sold.

And I also fully recognise the much larger number of people I know who have used synthetic pot and had no problems, in fact have found it to be easier on them than cannabis. These people's anecdata should count too, right? Oh wait..

Councils are starting to ban things before they've even been tested on the basis of media hype and second and third hand anecdotal evidence by people who've been trained to see only the bad side of drug use. This seems .. actually it seems like exactly what the government intended when it gave them this power while simultaneously stirring up a moral panic in the media, eh?
Collapse