So you know how yesterday I was all "Yes! Tonight I shall shear those lambs!" Well, that was all fine and dandy up until about 3pm when a giant thunderstorm rolled in from the south, and in about 5 minutes flat Horokiwi had disappeared completely and everything was being doused in sheets of rain. So much for that.

However, Charlene's show sheep still needed to be primped. The show is on Saturday and we had no time, so she got her sheep in in a lightning storm while I braved the motorway and people's having forgotten how to drive in wet conditions, and luckily it stopped raining just long enough for us to do the job. Since I've never done this before, I took pictures for posterity.

I also spent some of last night going through old photos. You see, I stumbled across this the other day - it's a history of the York Sub Aqua Club. As it happens, my Dad was a bit of a pioneer of SCUBA (and was a line diver before that), and some of the stories in that history were suspicioulsy familiar - particularly the one about the shooting and the one about the 'two blokes with buckets on their heads in a lake near Elvington' - and I have photos to prove it. So I contacted them. Turns out the BSAC is having its 60th Anniversary this year, and they would love to have the pics. Also, the guy who wrote the history probably knew my Dad. Among the pics I found a whole lot of other stuff, including this: 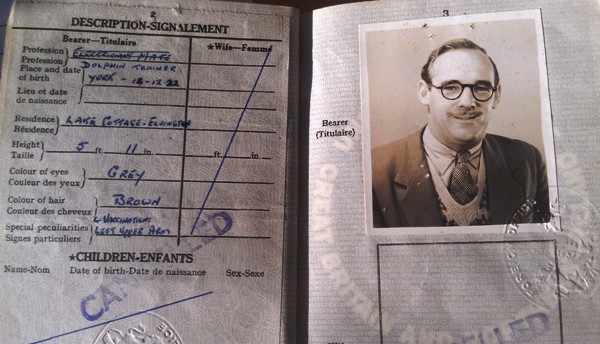 Note the bit in 'profession' where he's crossed out Electrician's Mate and written in Dolphin Trainer. Heh. This was 1961 and it was actually true. I have photos to prove that, and I think I'll put some in Monday's post.

My Dad was pretty awesome. Also, check out that knitted vest he's wearing in the pic. He never did have *ahem* subdued taste.
Collapse