"Dear Tats, Your application to graduate on 15 May 2013 with your Bachelor of Arts has been approved."

To which I go "Yay!" and on Twitter, also #throwupyergoats! To which someone responded wondering which type of goat would squeal the least on being thrown up.

I needed to find out.

Today, I'm having a day off. Not from work, but from training. Yesterday, DoomBoy had me doing a bunch of hanging leg raises and L-sit type things, and while I know that doing them will help make me stronger, I find them really hard and I can't do an L-sit at all (yet, damnit!). Thus, I came away feeling both exhausted and pathetic. The patheticness I'll get over, but the exhaustion is a sure sign I need rest. Combine that with stuffing my face with All The Protein Ever as soon as I got home, and that's my warning bell for going too hard and Hey Tats Take A Bloody Day Off Already.

Mentally it's a battle. I have an irrational fear that if I take a day off training, I'll wake up the next day and all my progress will be gone. I know this isn't true, but the niggling voice that says "Train, you!" is also what got me this far, you know? So ignoring it goes against the grain. I am ignoring it though. Take that, brain! I run this show, not you. Oh wait.. crap.

I'm going to take the opportunity to run errands at lunchtime, including buying a leather thong for this: 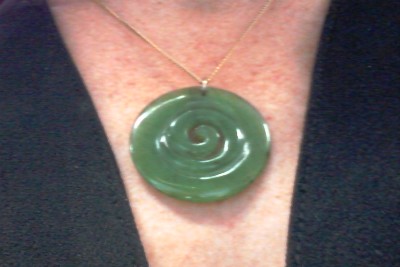 It's my pounamu. There's a lot of lore around pounamu, and one part is that it 'doesn't like' metal. I kind of get that vibe from it too. This one was a gift from

pombagira (another story about pounamu is that you should never buy it for yourself, it should always be gifted), and IMO because she's extra-witchy that makes it extra-special. I want to be able to wear it more often but it doesn't like the chain it's on, so I'm off to find a leather thong to suspend it from.

You know, there are very few kiwis I know who don't have a piece of pounamu, even if they don't all wear them. Interesting...
Collapse