While I think of it, I know there are a bunch of you on my flist who like godess-y, witchy, earthy and otherwise pagany stuff. There's also a bunch of you who are into made art. Well, it so happens that my friend

pombagira is a bit of a sewing wizz and likes to make goddess-y, witchy, earthy and otherwise pagany stuff. At the moment she's into making wall hangings and she's been on a binge and made a bunch of them. Here's an example: 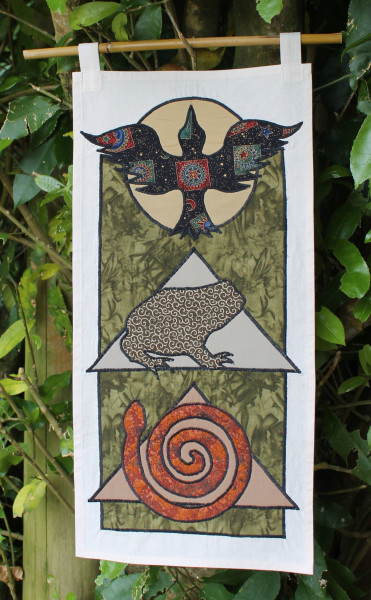 She does sell these, and in this post there's examples of more of her work, a link to her Etsy and details on how to nab yourself one if you want. She has this problem where often she doesn't get to list her stuff on Etsy because she posts pics on LJ and Facebook and then folks snap it up before she gets a chance. Anyway, I wanted to show it to y'all cos I figured you'd like to see it. Have a look around her LJ for more if you like it.

Anyway, I suspect I'll enjoy The Bard's Tale a lot more now that I can actually use the interface and it does what I tell it to. The downside is that it's a settings bug and default settings are the only ones that work, so I have to listen to the background music (which I always switch off because it drives me batty) as I play. Boo.

* "Why don't you make a real gantt chart, Tats? Like on paper n stuff." Because I'm not you and for this project I don't need to. I spend enough time thinking about it that writing down steps and phases would be redundant. Talk to me when I'm doing something with more than four parallel workflows.
Collapse