You know how I've been working on a dorky project for the last few weeks? Well, I finished it last night and now I have to admit what it is, and you will realise just how much of a dork I am.

"We already knew that Tats."

Okay okay, it's the Enchanter's Staff Tier 7 (Dragonbone) from Dragon Age: Origins. It's the one Wynne comes equipped with if you pick her up later in the game, or will cost you 4 gold 64 to buy from the dodgy merchant in Denerim. It's nothing special as staffs go but I thought it was pretty, and dark red goes with everything, right? Besides, everyone else makes the Staff of Parthalan or the Staff of Violation – I’ve never seen an Enchanter’s Staff outside the game. 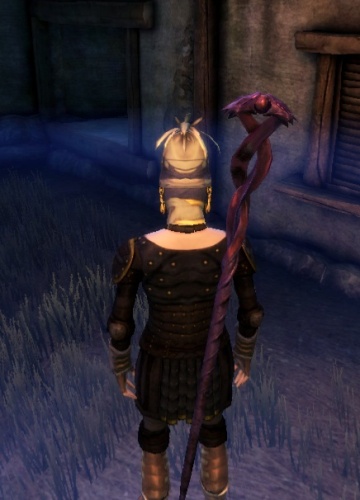 That was fun. Now I need to work out how to make it stick to someone’s back. In games they’re held on by magical magnetism, but in this world we need straps. I’m thinking some sort of hook top and bottom might work. And then what? I have no idea. Remember I said it'd cost 4 gold 64 to buy? Well the materials were ~$50 to make this, but if I were to charge the same rate for my time making it as I get at work, that'd put it around $1200 - and that's without added lighting bolts. Hmm..

I want to make some other staffs as well, and someone who shall remain nameless reckons it needs more LEDs so you never know, that might happen too. I also want to make Freedom’s Call (not flashy but cool because it would actually work as a stave and also close to my heart because it’s Anders’ first one) and Cold Blooded because I think it’d be fun to make.

There may end up being a staff rack in our hallway along with the stockwhip and Dr Wheel’s PhD. *cough*

PS since the dragon heads aren't exactly the same but are unique and special snowflakes, I think they need names. Part of me wants to call them Nigel and Colin but that's not very magical staff-y, is it?
Collapse