We got married! At Kiwiburn!

Sort of, anyway.  Our celebrant got his certification just before the event and we decided that the paperwork was too much stress to get done in the time we had, so we had the ceremony anyway and will do the paperwork later.  We had a sort-of official photographer (a friend who is a photographer who agreed to take some pics for us).

It was a burner wedding, the vows included such words as 'hot as fuck' and 'entropic heat death of the universe' and everyone said we were adorable*.  It was very sunny so there was a lot of squinting. 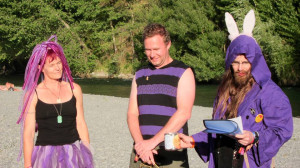 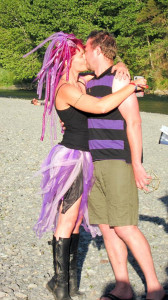 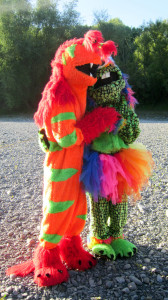 Tangle and Dangle came and they got all soppy.
Many thanks to

dreadbeard for not only marrying us but also becoming a celebrant so he could.  You are awesome. :)

* this word doesn't usually apply to me so I'm squeeing about that.
Subscribe