Tats Year of Being Selfish

Sometime over the Christmas period, the realisation dawned on me that I've been subordinating my needs for the sake of peace/getting along/being liked for a very long time.  Not in every way - I have no qualms defending my views on drugs, feminism, human rights, politics etc.  And if someone has a go at me I'll generally defend myself.

But for things that don't really matter, things like deciding where and when to eat in a group, asking for what I want, and putting my own needs before those of other people, I've been a bit hopeless.  We are all taught from an early age that people won't like you if you're selfish, but I think Mini-Tats may have taken this admonishment a little too literally.  As a kid I  was constantly struggling with big emotions in a world where any emotions are frowned on, and moving from place to place all the time trying to make new friends (but never having to keep them long term because hey, we'll move again soon), and generally just wanting a set of rules I could abide by for emotional safety.  Turned out that being low key and easy going and non-demaning and never prioritising my own personal wants and needs over those of others worked quite well for Mini Tats.

Now I'm a grownup and subordinating my needs leads to resentment of people I love, who are actually often unaware of the extent to which I've told myself that what I want is the easiest thing to let slide for the sake of having friends. And I've realised that actually, I matter.  What I want is important, if only to me, and I am the best advocate for my own needs.  I will be a happier person if I do put my wants and need forward for consideration sometimes.  And true friends are not going to ditch me for saying that actually I'd like my needs and wants to be prioritised.  But in order for them to prioritise them and thus make me feel like I matter, I have to express them first.

So I've decided to make a conscious effort to recognise when I'm shoving what I want aside to avoid being 'selfish', and to attempt to advocate for myself.  Hopefully gently and thoughfully, but since I find it so hard, to start with it'll probably mostly be aggressively.

Oh look, my navel has lint in it.

I have been making festival cloaks for a while.  These are full length cloaks with sleeves and a hood, pockets, and a hardwearing outer/deep pile fun fur inner that is reversible. They are admired wherever they go, and I've made a couple for friends but never one for myself.  My festival cloak is 10 years old, basically a fur blanket with a hood and string ties, that is getting thin and hard to wear.  So, festival cloak for Tats: 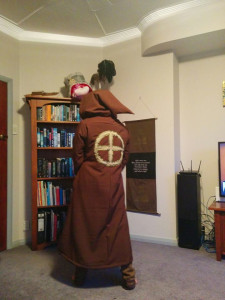 The symbol on the back has personal meaning for me.  It's lined with a variegated tawny fur that I hear Department of Conservation uses to make little stuffed kiwi to train the finding dogs with.  The fabric on the outside is suiting - so it doesn't feel all that nice (who cares? I'm on the inside!) but will be hardwearing and easy to clean.  And I love the chocolate brown, even though Dr Wheel says I look like a poo monk.  :)

The other area in which I've decided to push myself forward more is harm reduction.  I've been working at it for 9 years and it's starting to take off (mostly because of my work) and people with more resources and status are becoming involved and I am probably going to have to fight to stay in the conversation.  Happy has been saying for a while that I should be considering how to make sure I get credit for the work I've done, and I think it's time to start listening to him.

Be assertive not aggressive.  How does that work again?
Tags: costumer extraordinaire, selfish tats is selfish, your mum
Subscribe